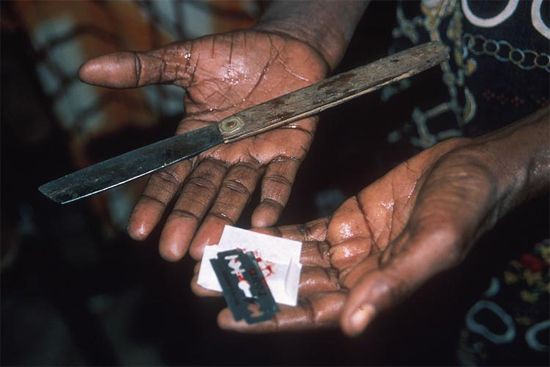 Mrs Zainab Shola in her late twenties, will strike you as a happily married woman at first meeting. As a teenager in secondary, she discovered that the flow of her monthly periods was not consistent and she usually felt itchy and uncomfortable. Medical examinations showed that the scar she had as a result of the circumcision she had as a child.

Shola later discovered that she was unable to engage in sexual intercourse because of the scar and no penis could penetrate her vagina which made her scared of getting into any relationship.

However, shortly before her wedding, she found a good team of doctors that were able to perform surgery on her vagina to widen the opening; the surgery was partly successful.

While she could now engage in and enjoy sex, she would only be able to give birth through Caesarean Section, and never through the vagina.

The ordeal of 34 years old Bukola Owolabi, a business woman, married with two children, started on her 13th birthday.

Her 20-year old sister, Korede, invited her to visit some relatives.

On getting to their destination, some elderly women welcomed them enthusiastically and ushered them into a living room.

Korede was later taken to another room, where she saw some bowls of water, a white cloth and mat on the floor, a blade, towel, cotton wool and some herbal mixture.

In the room were three women, was asked to strip though in a state of confusion, she complied.

She said: “I was told to lie on the floor and two of the women firmly gripped my legs.

“From that moment, it was one of the most unimaginable and excruciatingly painful moments of my life; the eldest of the women cleaned a blade and a small sharp knife.

“They opened up my legs and in a twinkle of an eye, I felt this sharp excruciating pain down my vagina; I screamed and I felt the ground moving round.

“After the procedure, I was told that I have just been circumcised, that I am now a woman; the women took turns to explain the implications and reasons to me.

“Cutting off some parts of my clitoris is cultural, a rite of passage and it will also make me not to be promiscuous.

“But they never told me some of the accompanying negative effects; Now, I quarrel with my husband over sex, I loathe having sex; it is not pleasurable and it is almost always a painful duty”.