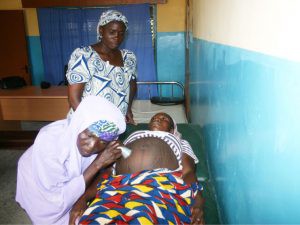 Abu’s wife, Ocheme had long wished for a baby girl, she has had three boys already in three years; the fourth attempt was a still birth and just one year after, she got pregnant again with same high hopes of having a baby girl.

Unfortunately, she never made it. She had prolonged labour and was taken for cesarean section- only the baby came safe.

Speaking on the causes of maternal deaths, Dr. Ejike Orji, Chairman, Advancing Family Planning in Nigeria, explained that most women couldn’t make it during child delivery because they have given birth severally and the uterus at that point may have been weaken.

He said, “by the time they get pregnant for the fifth time, a school of thought have it that the fifth pregnancy is more dangerous than the other four pregnancies put together, the reason is that the uterus is so flabby and can easily perforate, if care is not taken the woman can bleed to death too.”

Though an estimated 44,000 women die every year due to childbirth related complications, these complications are not only treatable but also preventable.

A Professor of Obstetrics and Gynaecology, Emmanuel Otolorin who delivered a lecture at a media round table on family planning and implications explained that with quality antenatal care and quick referrals when need be, the chances of maternal death is limited.

He also said, one sure means to prevent childbirth complications is to space the periods of pregnancy using contraceptives- this is especially as the body needs some time to heal before going through another pregnancy.

“The more pregnancy you have, the higher the risks of postpartum haemorrhage, just imagine a balloon, when you keep blowing it up, it gets weak, so you are weakening the wall of the womb and it just burst one day,” he said.

Although, while childbirth complications cannot be completely ruled out, many women like Ocheme do not attempt to space their children.

This poses great danger to the wellness of their reproductive system.

Otolorin further said that family planning could reduce maternal deaths by 44% and prevents another 44% of neo natal deaths equally.

However, the contraceptive prevalent rate in Nigeria is said to be low- about 6.0%- The reasons are not farfetched; many are overly scared of possible side effects, some are conservative- they hide under culture or religion while some are just not educated enough on the use of appropriate family planning method.