The struggle for health in Nigeria 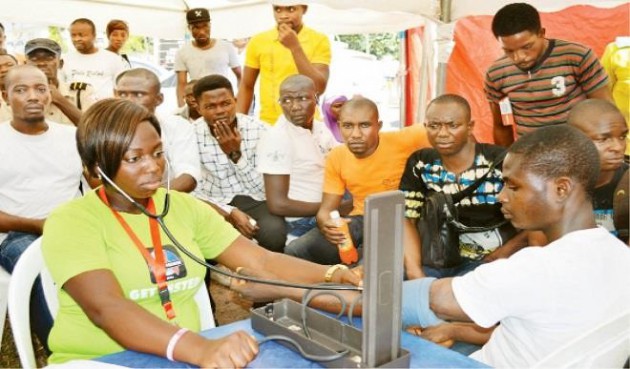 I must start by posting a disclaimer that the above title is from a book by comrade David Sanders, Zimbabwean academic and activist who now lives in South Africa. His thesis is that health can only be understood and attained in the overall context, including political, economic and cultural, within which it exists. Achieving health becomes a matter of how successful the struggle is waged and the extent to which the underprivileged wrestle concessions in their favour. In the final analysis, who lives in sickness rather than in health is class issue. This is why in a context where many are literally starving to death in the internally displaced people’s (IDP) camps and elsewhere, some still have menus of choice and exotic items in their well fortified homes or aboard their private jets. I have read stories of theft of cooked food, even by ordinarily decent people; this underscores how serious the food situation has become even among those not displaced.

Health is a much valued concept eulogized in Nigeria variously as being wealth, and a healthy nation is a wealthy nation.  How exactly health, in and of itself, translates to wealth need not detain us; suffice it to note that the search for health can in fact, become lucrative avenues for wealth. This makes the concept of struggle for health even more apt!

In contemporary Nigeria, the struggle for health is fierce. Many are unable to access services when needed because of costs which are generally high or unaffordable for the majority. The situation compels many to out rightly sell or pawn belongings in any major health episode. In the rural parts, belongings hardly go beyond domestic animals of goats and chickens; bicycles and motor cycles which are used to transport the farmer and family to the farm as well as ferry produce. The loss of these prized possessions is thus a loss of key components in production; but there is often little choice. Many medical facilities, especially at the secondary and tertiary centres, require payment upfront, or at the least, some deposits. When such deposits are overrun, additions are required without which further treatment may be terminated. In many cases however, treatment continues and when the patient is due for discharge, s/he is held hostage until all bills are paid. This new form of hostage taking includes new-borns and their mothers who are unable to pay delivery charges. There are two points to be made-the young infant born to a poor family changes what is usually a joyful occasion to a situation where the infant now starts life as a hostage to the political economy. It is established that Nigeria constitutes about 2% of the world population but accounts for over 10% of the maternal mortality. As part of the efforts to address this, there is a deliberate policy to improve in-facility delivery (where there are trained helpers) from the current 60 %plus who give birth without any assistance from trained helpers; taking new-borns hostage does not help the situation. In other instances, even corpses are held hostage compelling relations to raise funds quickly so the deceased can be accorded a ‘befitting’ burial. Hostage taking in health facilities happens rather frequently that it no longer attracts the attention of the media.

Nigeria now has a National Health Insurance Scheme which was meant to facilitate easier access to health services. However, the scheme is largely confined to the formal sector (which accounts less than 15%)  where employers enrol employees and does not reach most of the general population, who either have to foot their own bills, or survive by turning to alternative sources, including those of dubious qualities. This is the category who become prime targets for hostage taking.

But the Nigeria population is determined in the struggle to access health services. Almost on a daily basis the print-and electronic-media are full of impassioned appeals for donations to enable someone afflicted with some complications raise money for life saving procedures-sometimes overseas. Even more directly, there is some group of do-gooders who parade profound conditions and bodily deformities on the surprised public. The sights include the most pitiable afflictions such as a scrotum the size of football or even checks which completely overhang touching the upper parts of the arm. The group implores passers-by for donation supposedly to enable the sick obtain treatment. The reality of the sick is not in doubt as the conditions seen in life and blood bear testimony. Less certain is who the do-gooders are and what really happens to funds raised. Nor is it certain how the afflicted were recruited and what the quid pro quo might be. And so, the struggle for health cannot avoid the uncertainty which dogs all issues of integrity in Nigeria.

The other dimension, again with pecuniary motives, is the sale of ‘do-all’ medicaments. It is common place for vendors to advertise body cleansers-yes, every system must need cleansers. I have heard one sold for all conceivable conditions:- from fibroids, high blood pressure and diabetes to weak erections. The sellers were quick to flaunt their NAFDAC registration but are silent on what the preparation was registered for. They desire to corner a market as part of profiteering from the struggle for health.

In a similar manner there are announcement of some breakthroughs with cures for diabetes and sickle cell. As both claimants provided phone numbers, I once called the first. When I asked whether they have a cure for diabetes, the respondent said I was in the right place. Now, how much treatment does who with diabetes need before the complete cure is achieved? The respondent said that it all depends but that two of the bottles of their capsules which sell for N50,000 each would suffice. When asked if there are phones numbers of those ‘cured’ from whom I could verify, he answered in the affirmative but provided none. Then the newspaper advertisement gave the name of a certain ‘’engineer’’ who was cured; no contacts were provided. Is there really a cured engineer? When I asked why no contacts were provided he said these were abused. And so there is a ‘’cure’’ for diabetes advertised regularly in the media. There is no information that this claim has been subjected to any verification either by the regulatory agencies or the academia. Perhaps, someone ‘’cured’’ may one day stand up for testimony after many more may have been fleeced.

Just before the turn of the century there was plenty of excitement about blood washing. The idea is just as clothes or even human bodies can become dirty, so does blood. Some medical care providers indulge in the practice of luring people to come for blood washing akin to taking clothes for dry cleaning. The procedure involved sedating the patient, infusing drips laced with diuretic and colours. When the patient wakes up, the colour passed out in urine is adduced as evidence of the dirty blood. When his fellow practitioners descended on the main culprit, he quickly dropped the concept and the procedure like a hot plate of ogoho soup but not before after his pocketbook was upwardly adjusted.