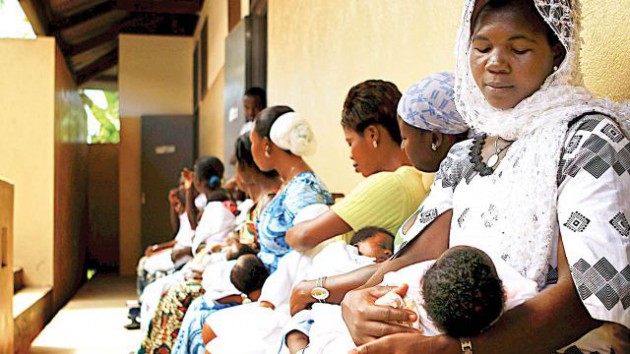 It was the nation’s high maternal mortality rate that influenced the recent focus of Development Research and Projects Centre (dRPC) on child health and maternal health in Nigeria. Global attention had been particularly attracted to the northern part of the country, where the case had been more worrisome.

Co-founder of the Centre, Dr. Yahaya Hashim, said: “We have been working in the area of public health for a very long time, and the main problem has remained maternal and child health. Maternal mortality rate in Nigeria, especially in the north, is one of the highest in the world. Child mortality rate in this part of the country is also one of the highest in the world. We have been engaging in this area for about two decades now. Our latest work is Partnership for Advocacy in Child and Family Health (PACFaH).”

Under the partnership, there are eight non-governmental organisations working together to purposely encourage government at both national and state levels, to identify innovative mechanisms, so that adequate funding for the four identified areas relating to child and family health could be provided.

These areas are Routine Immunisation, Family planning, Amoxicillin, as the first line treatment for pneumonia and ORS-Zinc, as treatment for childhood diarrhoeal diseases and Nutrition.

Northern resistance against polio immunisation and family planning started subsiding with the hasty intervention of the Centre.To Hashim, family planning is one of the areas that could help reduce maternal death significantly.

“So also is budgeting in these areas and the involvement of Islamic Opinion Leaders (ISOLs), coined and popularised by dRPC, in the fight against infant and maternal mortality has immensely helped in changing the opinion of such leaders towards health related matters,” he said.

He explained that the Centre, with the support of other development partners, did a lot in pushing for the involvement of both scholars and traditional institution in the campaign to improve child health and family health.

This became necessary, as dRPC had had initial disagreement over the involvement of Islamic Opinion Leaders in public health with the United States Agency for International Development (USAID).

Hashim said: “That period was a difficult one and it is because our work is funded by foreign donor agencies. Public health development is internationally established, recognised and funded by international donors, not just in Nigeria, but also all over the world.

“So, we said, if they were really serious about helping us to lower maternal and child mortality, as well as, improve child nutrition, there was no other way to do it than getting the blessings of Islamic scholars, as they have to understand what we are doing and agree with it. They have to be able to see that it is not something contradicting Islamic teachings. We needed to get them on board.”

Fortunately, the idea was generally accepted and even the World Bank started holding programmes with faith-based organisations. As a development partner and donor agency, USAID was especially commended by the Centre for its timely and effective intervention.

Opinions about family planning and polio immunisations in the North changed drastically, when dRPC facilitated some Islamic scholars to embark on a discovery journey to the famous Al-Azhar University, in Egypt.

“We are part of their journey to discovery and understanding,” Hashim explained. “There were issues regarding family planning and maternal death. There were all sorts of beliefs, especially when such things are associated with Western countries. Just like the case of polio vaccination and the controversies that surrounded it.”

The Centre has been undertaking the sponsorship since 2012, with over 100 scholars sponsored to Egypt. The Guardian learned that another set of programme is in the offing, involving more people that are not necessarily top scholars, but are part of the Islamic groups dRPC was working with. These include the Federation of Muslim Women Association of Nigeria (FOMWAN) that was working in the area.

What they did was to link the scholars with other Islamic scholars, especially in Muslim countries that have gone through similar experiences as Nigeria. This enabled an exchange of knowledge and experiences.

“In the end, many of them admitted that it was a discovery journey, as they were able to acquire newknowledge. They had access to new books and were thus opened to new horizon and influences. So, those with hardline posture were made to change their views and stance by the time they returned. They were quite different, upon return,” Hashim said.

Traditional rulers also came handy, as they helped in breaking down long-held hindering beliefs and myths. For instance, the polio issue wouldn’t have been a success without their intervention, which compelled resistant communities to comply.

“In such places as Kano, there has been no report of polio for over two years now, as well as, in many parts of the country. We are virtually on the verge of pronouncing that it has been eliminated. But for the war that came up in the Northeast and one or two cases that have occurred, we had virtually got rid of polio in Nigeria.”

It would be recalled that in his support for Family planning, the Emir of Kano, Muhammadu Sanusi II, had recently urged men to ponder seriously the idea of unplanned extra marriages and issues surrounding them. He said this, when the PACFaH team visited him and held a media interactive session at his palace in Kano.

He said: “Islam is so concerned about the kind of child you are giving birth to. We should all understand that feeding is not the only thing to take into consideration, when having a child. There is also the education, clothing, moral upbringing and many other things besides. It would surprise you to see a labourer, who is earning very little salary and finding it difficult to feed his wife and educate his child, marrying another wife.

“We shouldn’t be carried away by our sexual desires. After such a person has satisfied his sexual desire, he doesn’t care about what follows. And sometimes as time goes, he would divorce the new wife. Islam does not condone such behaviours.

“We all know we don’t run systems that look after our kids. I don’t understand the way we thinking— to give birth to a child and then send him to the street as a beggar, and subsequently get him engaged in other criminal activities. Since you cannot take care of him, it simply means you cannot control him. You don’t care about his feeding, his health, education and clothing and you still think you can earn his respect. Every right thinking person knows it is wrong to abandon one’s child.”

At a recent workshop organised by dRPC in Abuja, where Islamic scholars, faith-based organisations and traditional rulers came together to strategise on thematic areas of child development and family health, enlightening discussions were raised and strategies were perfected.

Sheikh Sani Isah, who is the Chief Imam of WAFF Road in Kaduna said: “Islam is elastic, when it comes to religious, social, economic and political issues. The elasticity of Islam on these issues is a very strong thing we can build on.” He appreciated the fact that dRPC was able to localise child health and maternal mortality issues, as opposed to efforts hitherto put by some foreign development partners in the area.

He called for the formation of Religious Leaders Network on Reproductive Health. He also praised the bottom-up approach of the Centre in the areas of discussion, and called for a proper family planning and other family health matters.

In his address, Prof. Mustapha Isma’il of the Centre for Human Rights in Islam, headquartered in Kano, assured that they were better equipped to talk to communities from the perspective of the Holy Qur’an and prophetic traditions. He urged that they refer people to some of the prophetic traditions that talk about family planning, after citing some contextual references.

Representative of Islamic Medical Association of Nigeria (IMAN), Dr. Ibrahim, disclosed that they use their Medical Outreach programme to keep people abreast on such issues as family planning, routine immunisations, and maternal health.

“At these programmes, we give people free consultation, free medical treatment and free drugs. We also have a large family of health personnel.”He proposed the use of right definition of concepts in the areas of intervention. Thus, child spacing should be preferred to family planning. “This is to enable the communities understand such concepts very well. We need to have the right message content. The aim is simply to create a better family and a better child,” he explained.

Sarkin Yakin Gagi from Sokoto suggested that there was a need for stakeholders to form a 10-women per ward strategy, who would embark on door-to-door enlightenment campaign on family health and other public health services. He identified a lack of effective and implementable policies, as well as, poor budgeting, as some of the impediments facing communities.

He called on Imams to start reshaping the attitudes of their communities towards family planning, through preaching in their respective mosques. “In Sokoto, for example, no Imam is scared of discussing family planning. Indeed, our Imams are now becoming agents of change in the area of family planning,” he said.

Hajiya Farida Sada of the Federation of Muslim Women Association of Nigeria (FOMWAN) said their involvement in the campaign unearthed some fundamental reasons why communities rejected polio vaccines in the past.

“Some parents rejected polio vaccines because they thought there were other more pressing diseases than polio. So, why over flog polio campaigns, they asked rhetorically.”

Commending USAID, Dr. Judith Walker, another co-founder of dRPC, said: “We were able to record many things for the past two decades because of support we have been getting from funders like USAID. We are really appreciative of what they have been doing.”